After a calm period, the German ID market came back with a vengeance. Starting on Wednesday, heavy storms on the German-French Border led to a very unpredictable weather situation, and that showed on the ID market. The first indicator was that the prices on Wednesday exploded both - on the ID and the balancing market based on a large renewable deficit which led to hour-long minute reserves being activated. Since that event, we have seen an unstable and nervous market, with prices spiking up regularly, especially when close to delivery. Looking at Wind maps for this week, it looks like the weather will act up on Wednesday again. Will the market be influenced the same way as last week? Only time will tell. 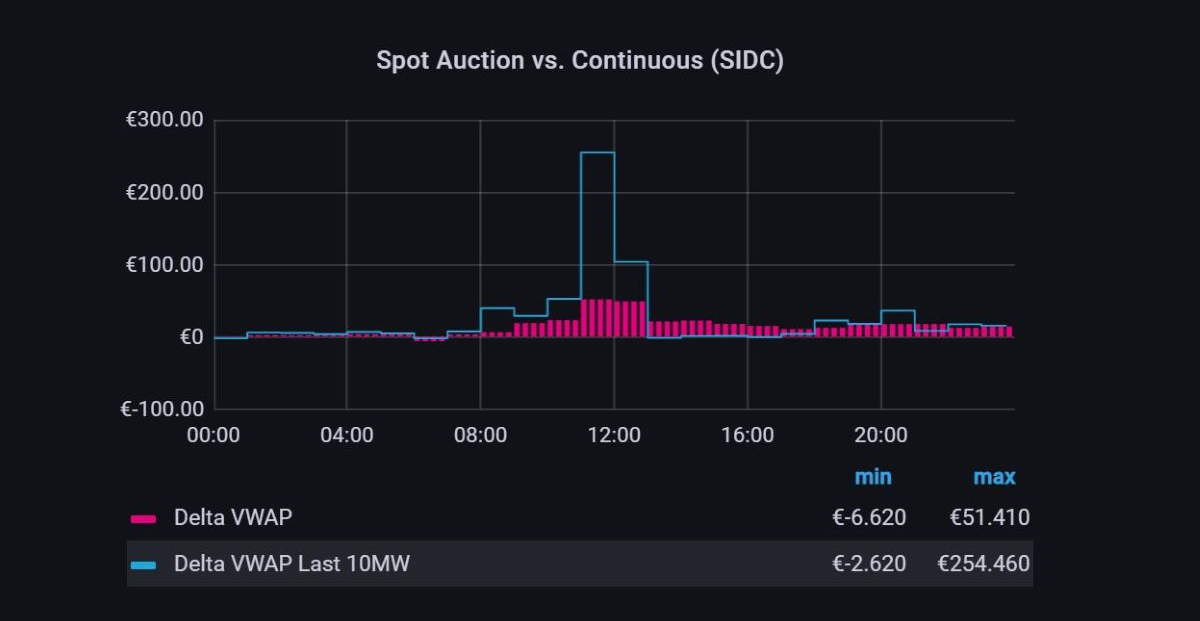 We have reached the midpoint of the year and will take this opportunity to look back at what happened on the German Intraday market in the last 3 months. While usually, the “Summer” months are the more boring months of the year, 2021 did not comply with this common wisdom and surprised everyone with really high prices. Not only did the prices explode on the German Power market, but across all markets and even all commodities. Gas prices – spiked, Oil prices – spiked, Coal prices – spiked, CO2 prices – spiked. While it was unheard of to have multiple days with spot prices over 100€ during the summertime just a year ago, it is normal now. Looking only at the German ID market, this spike in prices logically leads to increased volatility, which traders love. The reason for this is that if marginal costs for conventional power production rises, there is all of a sudden a huge gap between the price for renewable power (which is even negative because it is subsidized) and the price for conventional power, meaning that low residual load leads to crazy volatile days where prices can move 50€ or more in minutes.  The big question is if the marginal prices will stay that high or if the commodity markets will cool off again and what we are seeing now is just a sort of post-covid bullwhip effect. In any way, it is fair to say that this Summer is as unconventional as it is hot.

This week on Tuesday, minute reserves had to be activated to cover the missing power in the market.

The culprit seemed to be logical - high temperatures lead to high consumption, as ACs and fans are turned on. Yet, the impact of the temperatures was underestimated, and consumption was higher than expected. This led to an explosion of the imbalance and minute reserves had to be activated to cover the missing power in the market, which in turn lead to an explosion in ID prices as traders started to panic. It is still seen as a one-time event, but due to climate change, temperatures peak will continue, and so the extremes on the power market. 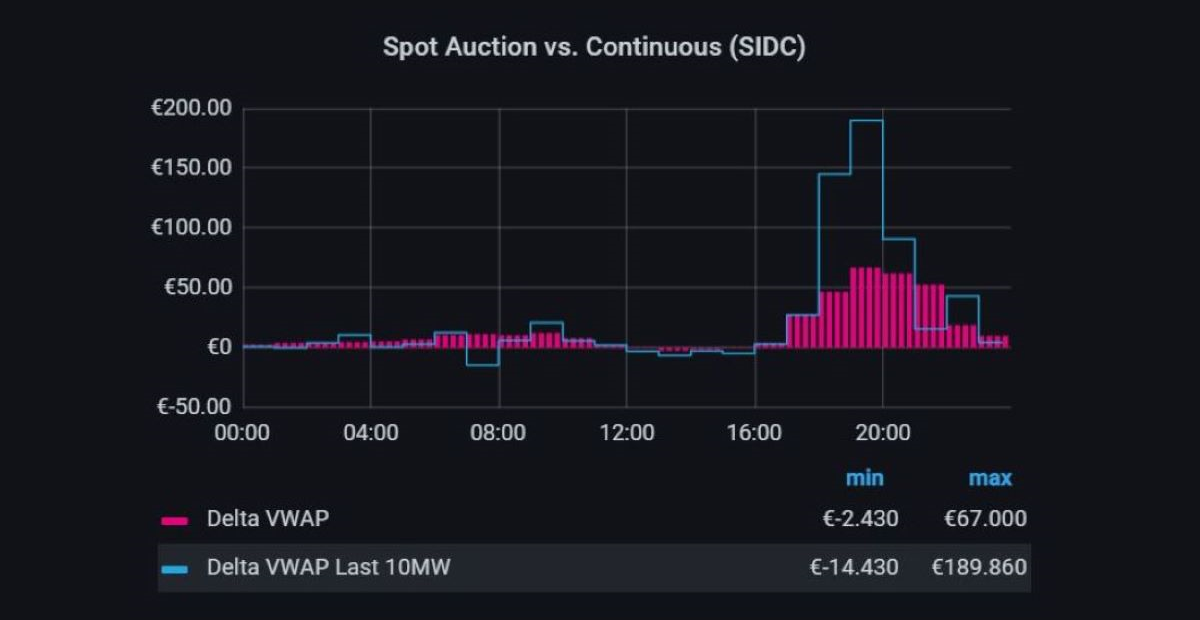 Sunday made it clear once again that renewable deltas are ruling this game on the German power market, and it's anything but boring! 💥

While the indication was that the day might be on the more volatile side, the rather low residual load and changes in wind production from the day ahead lead to one of the crazier days we have seen in the past weeks! In the first half of the day, there was a surplus of 5GW wind power, which lead the market to crash down over 20€/MWh from the spot. That flipped to a 3.8GW deficit in the second half of the day when prices in the late peak spiked. 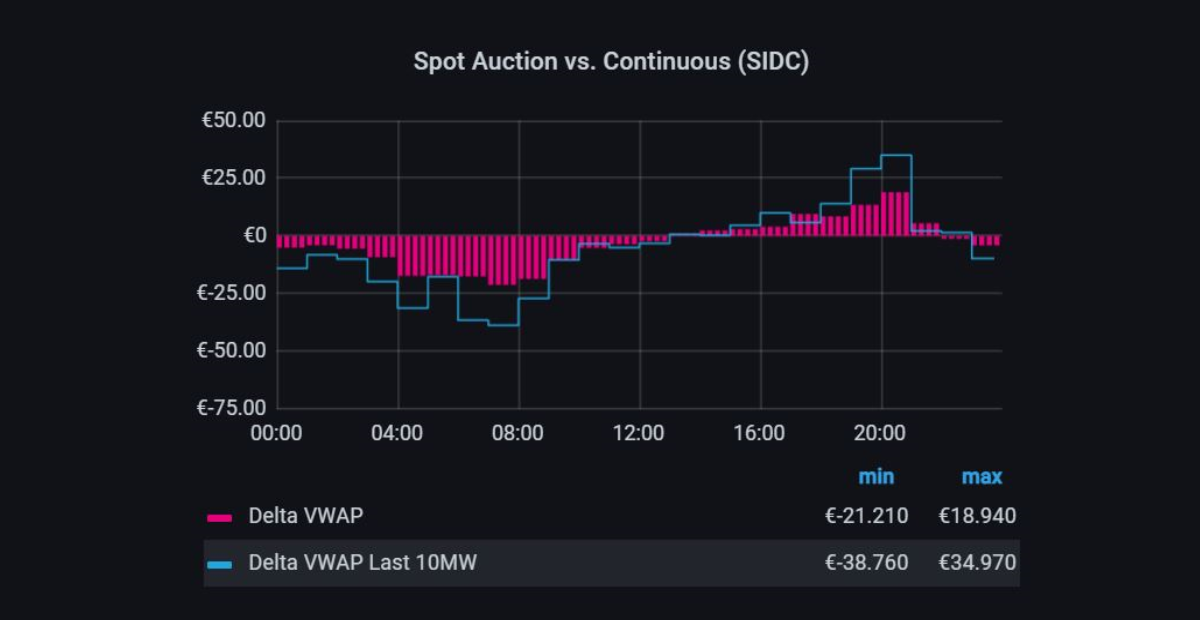 Today, we will look at another impactful factor of the volatile power prices in Germany - outages, and maintenance. At the moment,

Germany has an installed power production capacity of about 87 GW, from which only about 69 GW can be currently used (compared to 79 GW available three months ago), so over 20% of the installed production capacity is not available. All due to maintenance or an outage. That means - the marginal production costs are higher than usual. That, together with the low wind that we see currently, means that we will have to get used to spot prices around 100€/MWh for now. 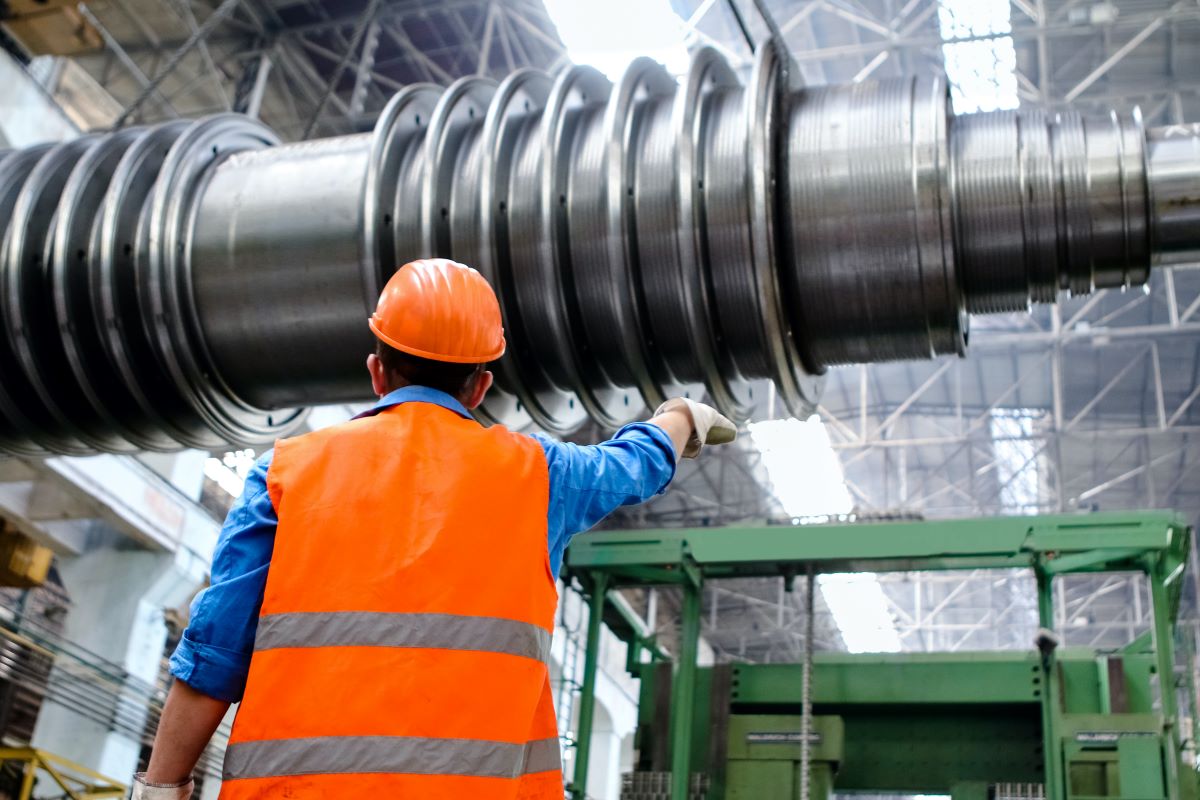 A relatively calm week on the German ID markets provided a great opportunity to take a step back and look at the bigger picture of the power market.

You don’t have to look hard to find that the main driver of the volatility in the last couple of weeks is a sky-high price for CO2 certificates. While the coal phase-out leads to less conventional production capacity in Germany, the rise of CO2 prices from 25€ to over 50€ made the conventional production that is still left significantly more expensive. The big question is if this is a temporary price spike or if this is the new level that we will have to get used to? 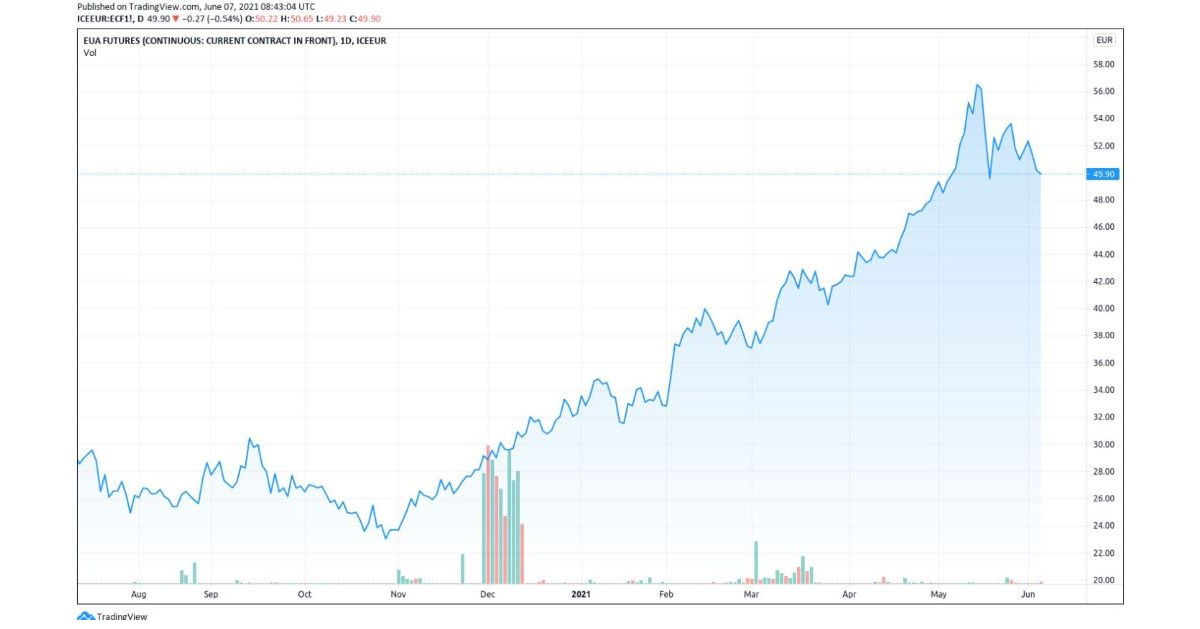 Another week is in the book, and quite a curious trend on the German Intraday market keeps to continue, the occurrence of negative prices.

The whole spring of 2021, we saw negative prices almost every weekend, and so it happened again last week, both on Monday, which was a public holiday, and on Sunday, where the prices traded down even further as the day progressed.
Will this trend continue in the summer months, where we usually see higher consumption in the mid peaks based on higher temperatures? Only time will tell. 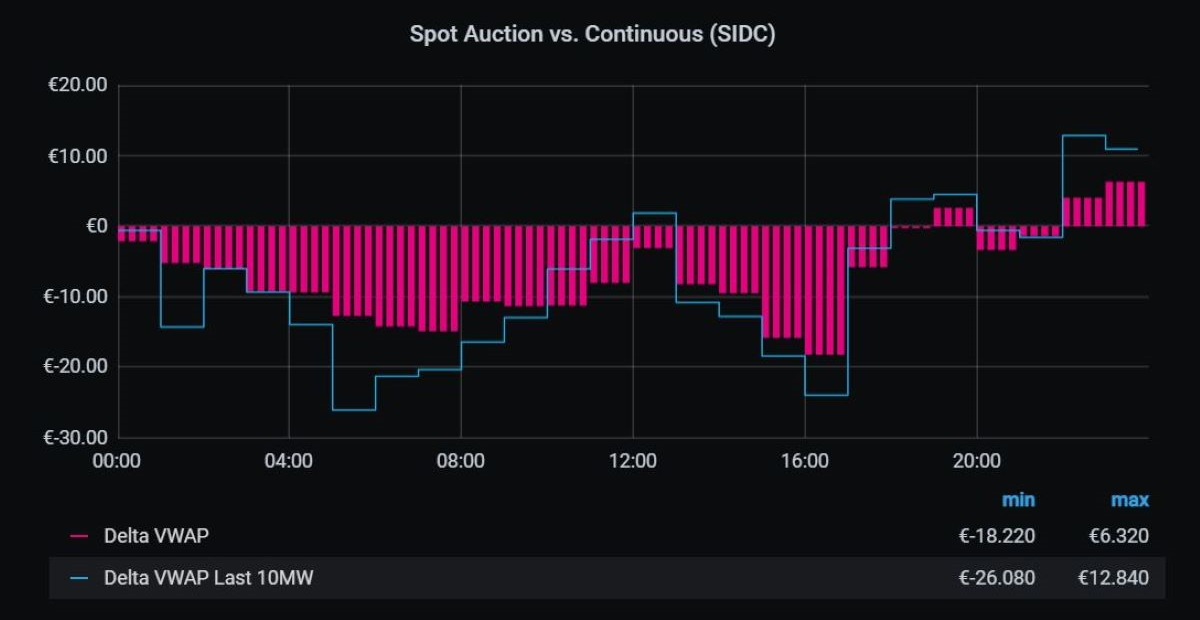 Why is it so crucial to be aware of all the details of the markets you act within? Last Weekend's Saturday was a perfect example of it!

After the spot prices were published, it was clear that the 6-hour rule was triggered*. Therefore, all of the wind farms that could be turned off - were turned off. That led to a wind delta of up to 7 GWh, and prices spike up to 32€ in the peak hours. Imagine your shock, if you wouldn't know that rule!
For the ones that don't know it yet: *6-hour rule - if there are six consecutive hours of negative spot prices, renewable producers will get no subsidies. 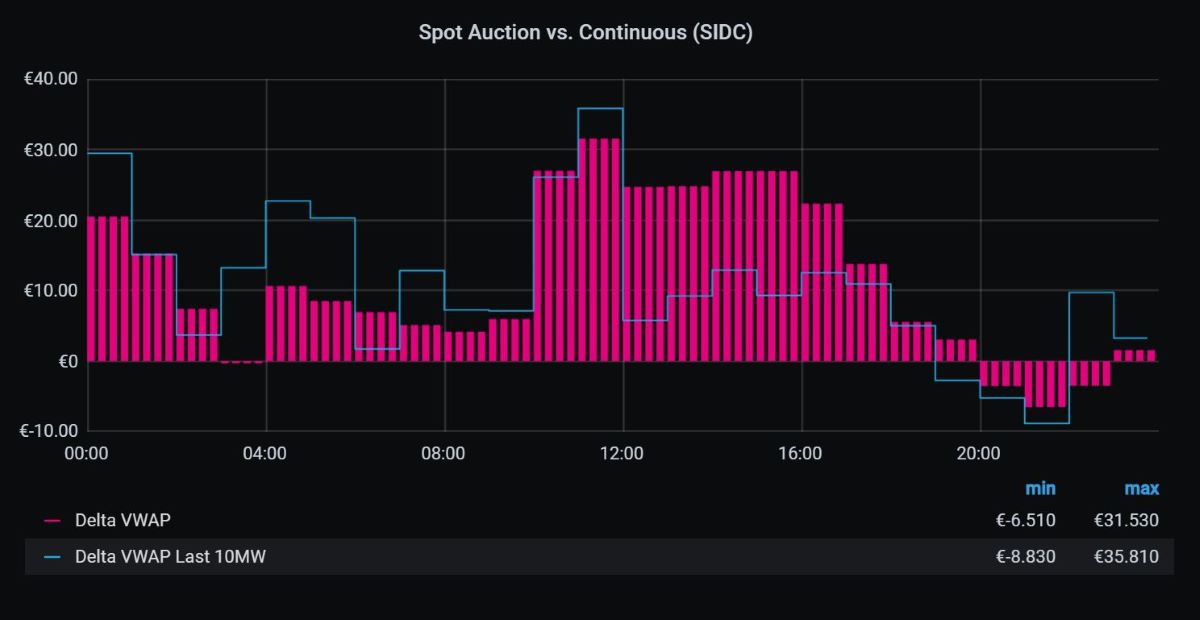 Is it summer yet?🌞 While last week's weather indicates a strong NO, looking at the German intraday market, it might as well be.
After months of wild weather scenarios and volatile markets, VWAP prices last week stayed pretty much around the spot! It could either be the beginning of the calm summer period or just a small breather before markets go wild again. 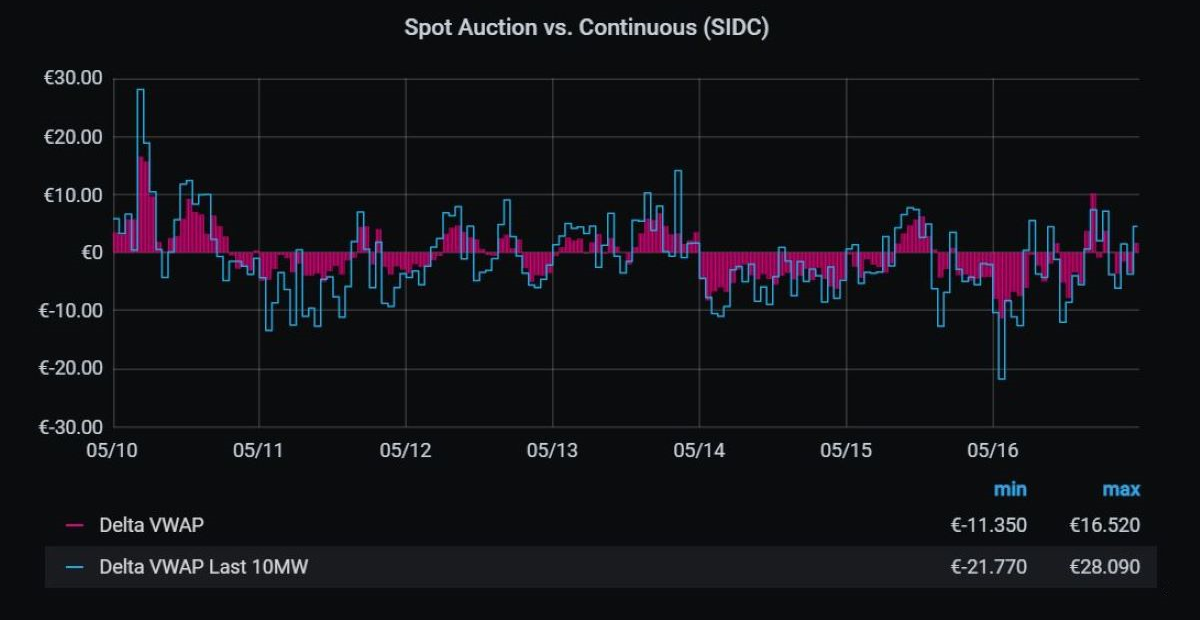 Mother’s Day - a day to show our appreciation to all the strong and admirable Women out there that put us into this world.❤️ On the German power market, that day was also about completely crazy prices! First, spot prices came out very low, with a baseload price of only 3,62€/MWh and the 6-hour rule triggered. Then the 15-minute ID auction had some very extreme prices, with 6 PM having prices of under -250€/MWh and over 250€/MWh in the same hour, and lastly, the intraday continuous traded up to -183€/MWh away from the auction. What a lovely Sunday! 🙃 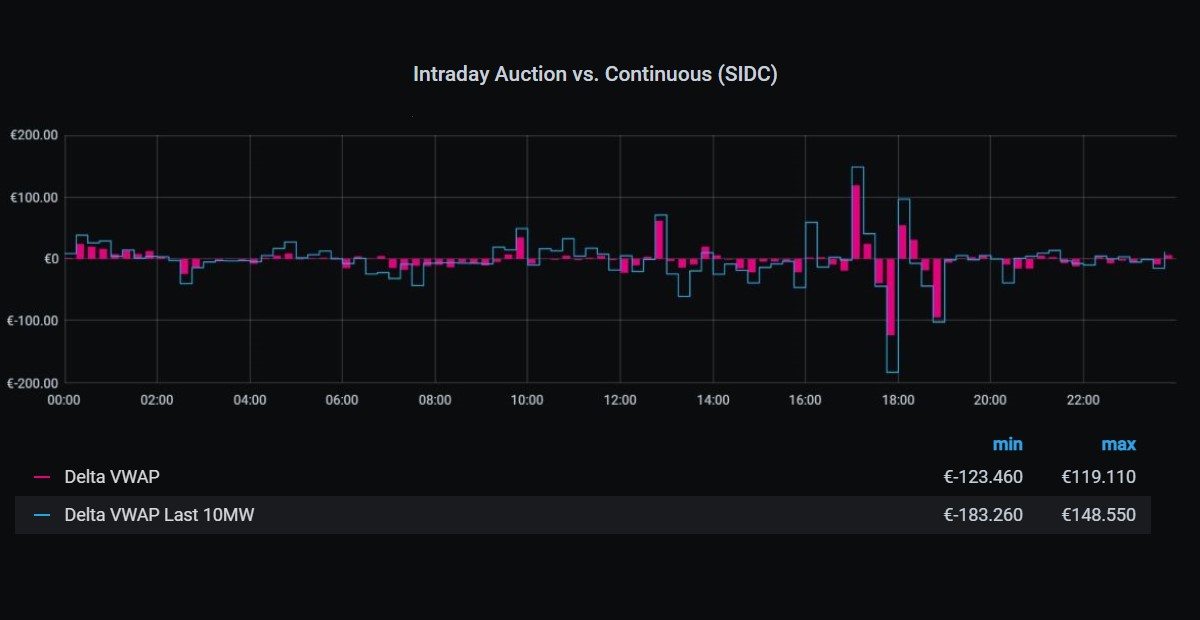 The beginning of a new month is always a good point to take a step back and evaluate the bigger picture on the intraday market, where we usually focus on quarterly and hourly products.

For April, it is easy to recognize a clear bullish* trend in the market, where the hourly VWAP traded up 2.5 EUR/MWh compared to Spot (-0.3 EUR/MWh in March). The main reason for this trend is the second week of April, in which large renewable deficits compared with very low spot prices lead to huge price spikes in the intraday market. 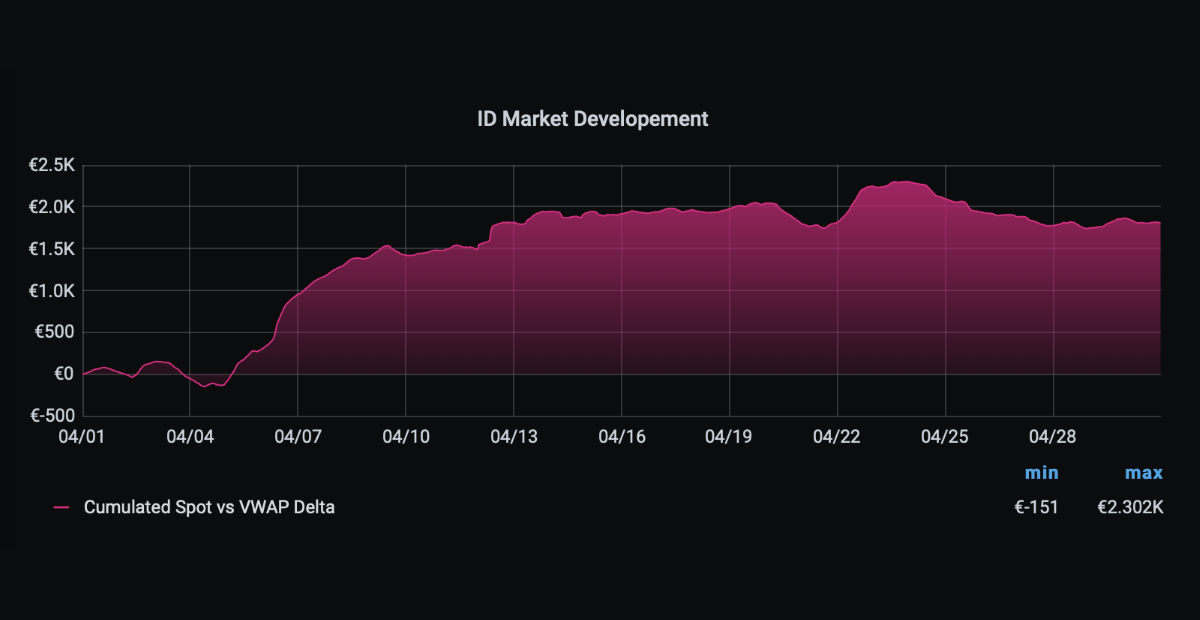 An old Austrian saying goes, “April, April, der macht was er will!” (eng. April, April, does whatever he wants!) and it seemed to be accurate for the German intraday power market last week. On multiple occasions, the intraday prices moved miles away from auction prices. For example, last Wednesday, where price differences in some of the quarters were higher than 30 EUR/MWh.

These events have one thing in common - they tend to happen when auction prices are either high or low. There is a simple explanation for this: the stack of conventional power plants is getting thinner and thinner on the edges, so in high or low price scenarios, even small renewable deltas in intraday, which usually wouldn’t move the market by a lot, can make a 30 EUR/MWh difference. 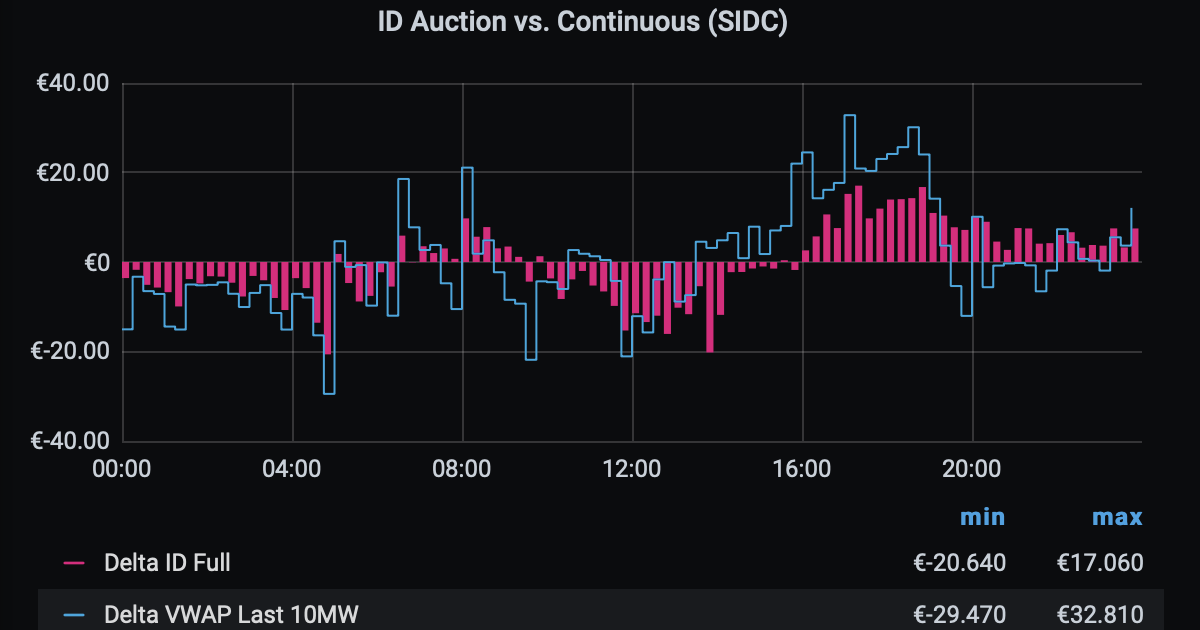 The price is right

Hand in hand towards the energy revolution

Storing away for a rainy day, Part 2

Storing away for a rainy day, Part 1