Mind-mapping A.I.
dig deeper into the world of Artificial Intelligence

Currently, there is a lot of hype about what Artificial Intelligence (AI) is and what it can (or should) do. If you ask various people for a subdivision of the topic, you will get completely different answers. As we've already pointed out in our blogpost on how AI is shaping the world of electricity trading, even for defining AI there is no single, universally accepted version. In general, you can say, that it equips machines with capabilities comparable to the "natural intelligence" attributed to humans and animals but there is so much more to explore! We created a map with the most important categories and terms including their definitions. Today, you can expand your horizon and dig deeper into the world of AI! 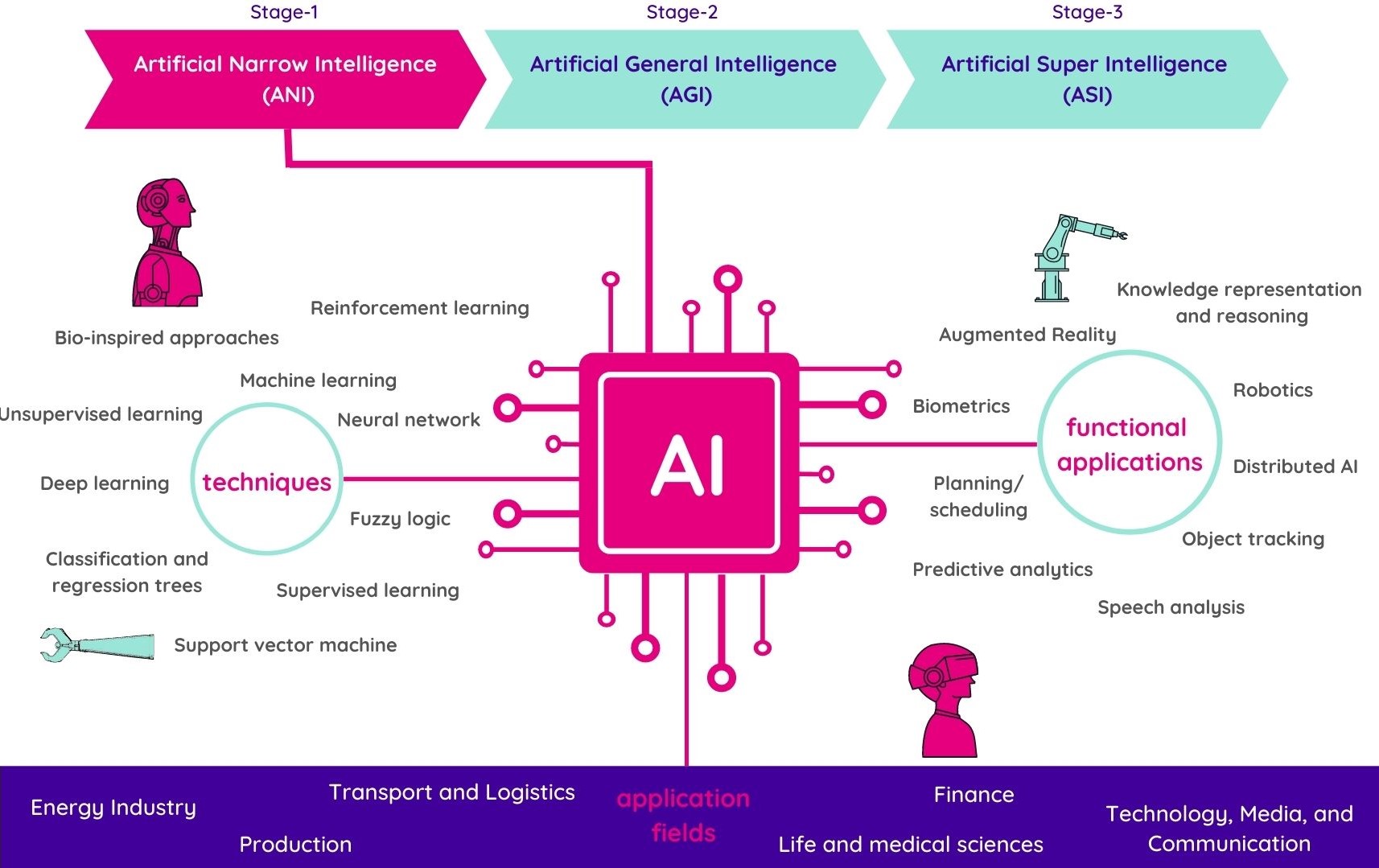 Be prepared that the next passage might sound like it has been taken straight out of a Sci-Fi movie rather than an academic paper. As stated in the introduction, AI can be seen as the ability for machines to demonstrate similar (or equal) intelligence to humans. Consequently, technologies can be categorized by the extent of their capacity to mimic human intelligence and characteristics. The three main natures of Artificial Intelligence are:

Artificial Narrow Intelligence (ANI): also called weak AI, is specialized in one area, completing one single task. It can accomplish this one task very well, sometimes even outperforming humans in specific repetitive functions. We are surrounded by weak AI – from Google's search engine algorithms, using the apps on our smartphone, streaming TV shows to drone robots. As of today, ANI is the only existing AI.

Artificial General Intelligence (AGI): often referred to as strong AI. While weak AI can only perform specific tasks, strong AI refers to a machine that is as smart as a human. It can basically compete with humans across all endeavors, including attending school and university. Because the human brain is so complex, AGI is much more difficult to develop and has not yet been achieved. However, some scientific experts in the community have predicted it to emerge (on average) by the year 2060, remaining uncertain.

Artificial Super Intelligence (ASI): evolves to become self-improving with intelligence superior to humans in many or all areas.  With ASI we are talking about something that exceeds all our imaginations. Although it is likely hundreds of years away from being developed, there are already ethical debates on how far humankind should pursue AI without losing control.

Algorithms automate processes by mathematically standardizing technical procedures and rules. Simplified, they can be represented as a calculation rule according to the principle "If . . . then". A mathematical formula solves a narrowly defined question or structures a process. Today, AI is basically a combination of different algorithms that work in a specific area with large amounts of data or have been trained with them. Below, we have gathered some of the most important algorithmic approaches used to implement AI functions:

Machine learning: The term Machine Learning (ML) is often confused with or even used as a synonym for AI. Although closely related, they are not identical. ML is actually a subfield of AI. It consists of techniques that enable a software program to gain insights from data. Algorithms can recognize patterns and regularities in data sets and develop solutions from them.

Classification and regression trees: represent a process or set of rules as a series of decisions in a tree structure. It illustrates how to predict the values of a focus variable based on other attributes. The outcome of a classification tree is a discrete value, such as the class to which data belongs.

Fuzzy logic: is a decision-making approach which is based on multivalued logic rather than binary logic ("true" and "false"). A two-valued logic often considers 0 as false and 1 as true. However, fuzzy logic deals with truth values between 0 and 1, and these values are considered as intensity (degree) of truth.

Neural network:  are algorithms that are modelled on the human brain. This abstracted model of connected artificial neurons, allows complex tasks generally organized in successive layers of functions, each layer using the output of the previous one as an input.

Deep learning: is a subarea of machine learning and uses neural networks. Training methods that draw on and analyze large amounts of data are used to create artificial intelligence. Based on existing information and the neural network, the system can repeatedly link what it has learned with new content and thus learn again. Most deep learning models are implemented by increasing the number of layers in a neural network.

Bio-inspired approaches are inspired by biological systems, take inspiration from a wider range of biological structures rather than just the human brain that are capable of autonomous self-organization. These algorithms mimic biological mechanisms to better adapt decisions to new problems and new data, and swarm intelligence.

Reinforcement learning:  is a subset of machine learning that uses a system of reward and punishment. An agent learns how to select an action from its action space in a given environment to maximize rewards over time.

Supervised learning: the most widely adopted form of machine learning. In supervised learning, the expected grouping of the information in certain categories (output) is provided to the computer through examples of data (input) which have been manually categorized correctly and form the training dataset. Based on these examples of input-output, the AI system can categorize new, unseen data into the predefined categories.

Support vector machine: a supervised learning algorithm that analyses labelled/ grouped data, identifies the data points that are most challenging to group and, based on that, identifies how to separate the different groups and classify unseen data points.

Unsupervised learning: a type of machine learning algorithm that finds and analyses hidden patterns or commonalities in data that has not been labelled or classified. Unlike supervised learning, the system has not been provided with a predefined set of classes, but rather identifies patterns and creates labels/ groups in which it classifies the data.

AI functional applications cover the operations performed by AI techniques, independent of the sector (application field) they are used in. They can be categorized as follows:

Augmented Reality: expands the perception of reality for humans. It works computer-aided and offers the user additional information that is integrated or superimposed as elements into the visual and auditory representation of the world. Extension elements are, for example, texts, animations, images, videos or graphics. The user often has the option of accessing the augmented content via gesture control or touchscreens.

Knowledge representation and reasoning: represents information from the real world for a computer to understand and then utilize this knowledge to solve complex problems such as diagnosis a medical condition. It is not just about storing data but allows a machine to learn from that knowledge and behave intelligently.

Distributed AI: deals with systems that are formed by groups of individual components called agents. Such a system is specified by its individual agents, the interactions between them (described by a programming language), and finally by the environment itself. The individual agents cooperate to achieve specific goals.

Object tracking:  is the problem of determining (estimating) the positions and other relevant information of moving objects in image sequences commonly used in image retrieval, surveillance, and automated vehicle parking systems.

Robotics: deals with the design, creation, control, production and operation of robots, i.e. machines that can move independently and perform various activities. Anthropomorphic or humanoid robots also involve the production of limbs and skin, facial expressions and gestures, and natural language capabilities.

Speech analysis: deals with recognizing, analyzing, classifing and storing speech information. The stored information is then put in relation to the spoken words, to their meaning and in the characteristic features of the speaker.

The potential applications of AI are spread across all kinds of economic sectors and have become indispensable in many areas. AI is found primarily in end products and services, but also in areas with high automation potential in a company, i.e. in productive core and support processes. Some of the most important fields include:

Production: AI algorithms can help companies manage the increasing complexity of development processes and quality regulations. This includes improved monitoring and automatic adjustment of production processes as well as optimization of the production and supply chain.

Finance: AI is already deeply integrated into finance: from the approval of loans to the management of assets, the assessment of risks to optimizing the prevention and detection of money laundering and fraud.

Technology, Media, and Communication: The applications in media are diverse and range from improved archiving, search and recommendations of media, generation of custom content to better personalization and customization in advertising and marketing.

Energy Industry: Decentralization, the connection of new electrical consumers, and a growing share of fluctuating renewable energies are contributing to the increasing complexity of the energy system. AI can help to handle the enormous data streams that are generated, serving to optimize the system and better satisfy customer needs. Classic application areas include the power grid, power consumption, and electricity trading.

At enspired, we are combing different algorithmic approaches to offer intelligent, AI-supported, automated energy trading as a service, 24 hours a day, 7 days a week, 365 days a year. In doing so, we leave behind programmatic approaches limited by human capabilities, using a wide variety of available trading data from relevant sources. Our data scientists are working with cutting-edge AI technology to delegate full decision power to our models, adapting trading strategies to make optimal decisions in milliseconds.

Are you ready to market your assets but not sure how to get started? Or just want to avoid the hassles of running your own modern intraday trading desk? Our team of experts in AI-based energy trading can take care of it for you, getting you started in no time with full transparency and no risk.

Subscribe to our newsletter to stay abreast of the latest developments in the energy revolution.